The western Kentucky community of Kuttawa recently celebrated a 109-year-old resident in a big way. Friends, family and local officials rallied together to coordinate a birthday parade for Ruth Harrington on May 6. 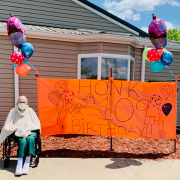 Born in 1911, Harrington and her late husband Paul moved to Kentucky in the 1950s and opened popular Calvert Drive-In in Calvert, Ky. in 1953. The drive-in movie theater has been operated by her family for four generations.

Local news outlets and hundreds of shared posts on social media spread the news of the parade, calling on the community to show up to celebrate Harrington. Due to COVID-19, extra precautions were taken to ensure everyone, including Ruth, was safe and protected.

Harrington has received thousands of birthday greetings following the event. News outlets across Kentucky and the U.S. picked up the story honoring her landmark birthday. The Paducah Sun talked to several generations of Harrington’s family about the 109-year-old woman’s life and Paducah-based WPSD-TV called her a “beacon of hope” for the western Kentucky community.

The full video of the 109th birthday parade is available on River’s Bend’s Facebook page.

I-Move Kentucky kicks off construction in Louisville
Scroll to top