Truman’s to locate headquarters in Louisville 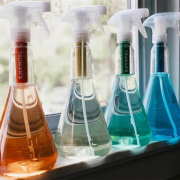 “Truman’s is an innovative startup company offering a business model of sustainability for the cleaning supplies industry,” Gov. Bevin said. “The support of a well-respected company such as Henkel highlights this project’s strong potential. We are proud to have this venture in the commonwealth, as it promises to be a great opportunity for the Louisville community and its workforce.”

The seed funding will allow Truman’s to locate its headquarters in Louisville’s rapidly growing NuLu district. The location will house the company’s sales, marketing and customer service operations. Other companies supporting Truman’s seed round include Uncommon Denominator, Starting Line and BFG Partners.

“The investment in Truman’s confirms what we’ve already seen with our rapid growth since launching earlier this year,” said Jon Bostock, co-founder and CEO of Truman’s. “This puts us on the offensive against an industry that’s wasteful and slow to innovate.”

Read more in The Lane Report.