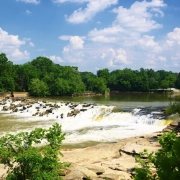 Revitalization efforts are underway at Rochester Dam to improve the barrier at the lock and public safety while striving to keep the historical dam intact. Construction just began on the dam, which was built in the 1830s.

John Dix with the Rochester Dam Regional Water Commission gave updates to Muhlenberg County Fiscal Court last week on progress at the dam, where nearly 50,000 people in Muhlenberg, Ohio and Butler counties draw water from the Green and Mudd rivers.

Dix gave a historical overview of the dam including its 25-year lease from the U.S. Army Corp of Engineers after passage of the Water Resources Development Act. RDRWC was formed in 2013 to find funding to repair the dam, which had been in limbo under the Corp’s jurisdiction.

In 2016, McConnell secured language in the Water Resources Development Act supporting Kentucky’s water infrastructure and giving more control to Kentucky communities. The McConnell language in WRDA called for the transfer of ownership of several dams on the Green River from the U.S. Army Corps of Engineers to local entities.