Visitors to the updated, expanded Kentucky International Convention Center (KICC) will experience a new approach to delivering drinking water as a result of a partnership forged last year between Louisville Water Company and Kentucky Venues, operator of the state-owned facility. 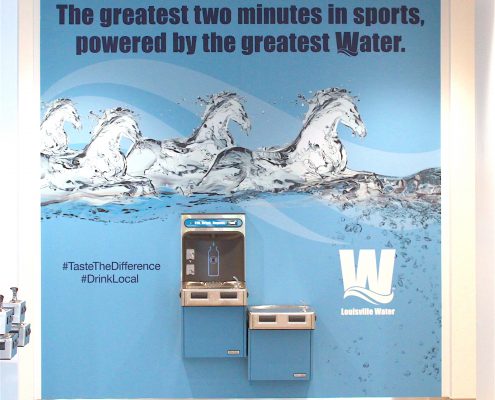 The revamped KICC reopened its doors on Aug. 6 following a two-year closure and now boasts greatly increased capacity and many modern features. Louisville now will play host to larger conventions that make use of 200,000-plus square feet of exhibit space, a 40,000-square-foot ballroom, a 175-seat state-of-the-art conference theater and 52 meeting rooms.

“We are very excited about the exposure Louisville Water will receive with this presence at KICC,” said Kelley Dearing Smith, Vice President, Communications and Marketing, for Louisville Water. “Sustainability is growing in importance as is drinking water over other types of beverages.”

Besides providing ready access to a hydration source, the water stations are intended to educate visitors about the high quality and good taste of Louisville’s drinking water — something uncommon in the most places across the United States and around the world.

“Louisville’s water has received accolades for being a high-quality, affordable, abundant product for many years,” Dearing Smith said. “In fact, it’s so high-quality that Louisville Water trademarked its tap water as Louisville pure tap®, something no other water utility has done.”

“There are several benefits to having water fill stations at KICC,” said Stacey Church, KICC’s General Manager. “One of the most important benefits is attendee convenience. As I am new to the area, I was surprised to learn about Louisville Water’s reputation for and commitment to high quality and good taste. I am definitely drinking less bottled water and more Louisville Water.”

Partnerships between a water utility and facilities are uncommon, according to Church, who moved to Louisville in January to take the KICC position. She has overseen properties in cities such as Fort Worth, Texas, and Springfield, Mass., and Church said this relationship is unique.

“I have worked in several markets and venue types, and this is definitely one the most creative partnerships I’ve been involved with,” she said. “It’s the first time I’ve heard of a water utility partnering with a facility in this manner.  Additionally, I have had the opportunity to visit numerous centers and can’t recall seeing any such partnership. It seems we’re fortunate to have another industry leader as a partner.”

Plans with Louisville Water are in the works for a branded, refillable bottle that convention groups could distribute to attendees, said Jennifer Aswegan, Director of Catering Sales for Levy. Bottled water still is offered to groups that book the convention center, but there will be ongoing efforts to introduce clients to the sustainability message and availability of the bottle fill stations, she said.

Water stations at convention facilities is common on the West Coast, Lessner said, but she’s not aware of any relationships between venues and a water utility such as the one Levy is establishing with Louisville Water at KICC. “Levy is big on leading the way,” she said. Plus, there is “a lot of demand from people coming in for conventions. They want water.” 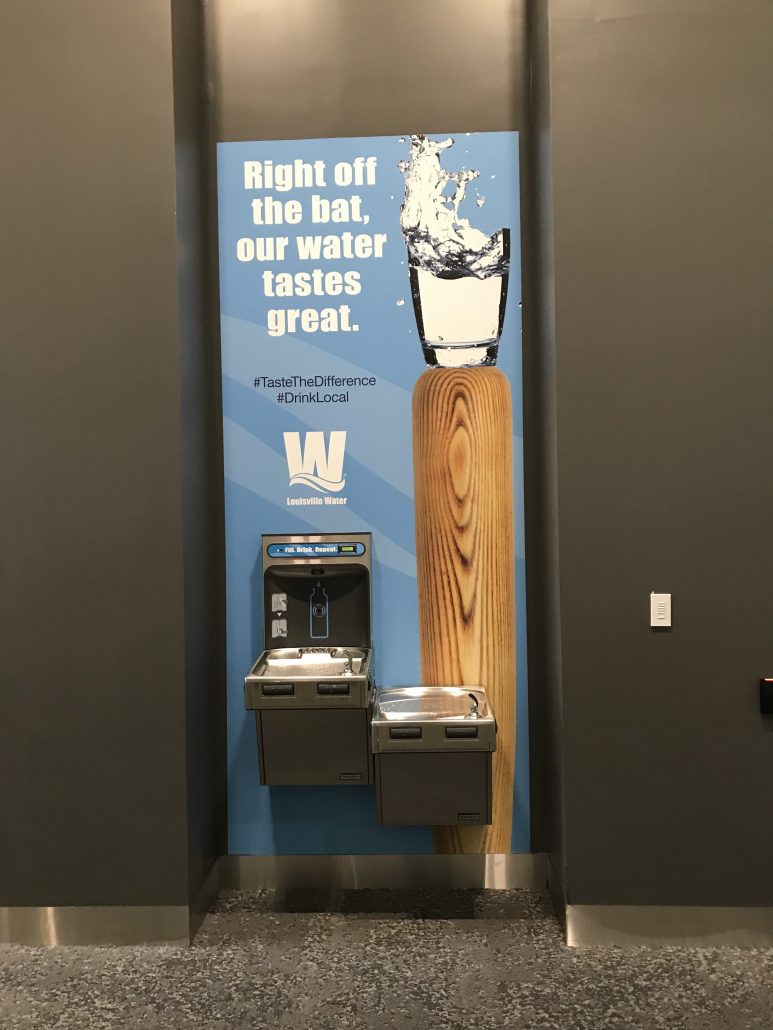 KICC’s branded water stations potentially could help draw conventions to Louisville and the newly reimagined convention center, according to KICC’s Stacey Church. “Our partnership with Louisville Water Company sets us apart from our competitors. Anytime we can expand the list of unique experiences in Louisville, it’s a win for us,” she said. “Meeting planners look to offer one-of-a-kind experiences to attendees. More interest from meeting planners is always good for business.”

KICC’s hydration stations join others that Louisville Water has introduced in recent months to encourage consumption of the local product and to reduce plastic waste, Dearing Smith said. Louisville International Airport and the Louisville Zoo are other places where the Louisville Water brand and product have a presence. The Kentucky Exposition Center will join the list of locations soon.

“Louisville Water has made continuous efforts to sustain the message about our great-tasting water,” said Dearing Smith. “The partnerships we establish, where our brand can get exposure to audiences in public places, serve us well. Plus, they are helpful for the host locations and benefit consumers by making quality water available at no cost. They’re a three-way win.”

Six factors for a successful public-private partnership
Scroll to top