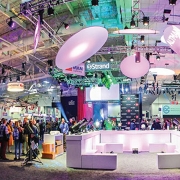 The word chosen by Doug Bennett, senior vice president of development for Louisville Tourism, when describing the state of conventions and tourism in Greater Louisville is “growth.”

With the opening of the $315 million Omni Louisville Hotel in 2018 and renovations for Louisville Marriott Downtown and the Galt House Hotel, among others, the “impact on the product we’re able to sell is tremendous,” Bennett said. “Site inspections are way up in the past 12 months. Business across the board is up.”

Total tourism spending is an annual $1.307 billion in Louisville, according to a 110-page report by Longwoods International for the 2017 domestic tourism business in Louisville, with the top two expenditures being lodging (39%) and food/beverage at restaurants (25%). Of the 24.7 million visits, 81% were leisure travelers. The average age of visitors is 43.4 years.

After a two-year closure for a $207 million renovation and expansion, the downtown Kentucky International Convention Center (KICC) opened in August 2018 and generated 60 events in five months, with an estimated economic impact of $30 million. The new space has a 40,000-s.f. ballroom with color-changing LED walls and no columns; 52 meeting rooms; a tiered conference theater with seating for 175; a kitchen capacity of 15,000 meals per day; and 200,125 s.f. of contiguous Class A exhibit space. KICC also has Oak & Brew; a restaurant for coffee by day, bourbon by night.

“Groups say ‘yes’ to Louisville because of the number of rooms and things to do,” Bennett said. “A bigger convention center, more hotel product and more to do after 5 p.m. help a destination grow and become an option.”

Read more at the Lane Report.