Gov. Matt Bevin said Tuesday that he expects public-private partnerships to be a solution for major public infrastructure projects, including the I-69 Ohio River Crossing project in Western Kentucky, as many as five state resort parks across the Commonwealth and perhaps a major airport expansion. 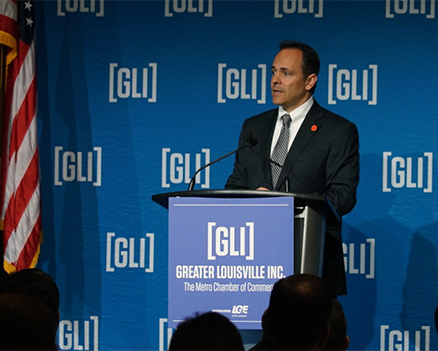 Bevin, whose business career included investment-management firms, was bullish on the future of public-private partnerships as he spoke to a crowd of business leaders assembled by Greater Louisville Inc., a member of the P3 Kentucky Roundtable.

“We are going to see a paradigm where public dollars and private dollars are invested together,” Bevin said. “There are a lot of things than can be done with P3 partnerships. I’m a big proponent of them if done right.”

Bevin highlighted a number of potential P3s including:

I-69 Crossing – Completing I-69 through Kentucky and Indiana by building a new interstate crossing at Henderson, KY and Evansville, IN, will “transform the region” and benefit the economies of both states. “I-69 will almost certainly be a P3 project,” Bevin said.

State Resort Parks – The Commonwealth has been considering and entertaining proposals for major improvements at Kentucky State Parks. And Bevin said Thursday that he like the idea of offering up a group facilities for private sector innovation. “Maybe we could give two or three or five of our state parks to a company like Marriott – I’m just picking a name up, whoever – somebody who manages resorts in places of that sort and can do it in a way that’s more effective than we have historically done.”

Bridge Repair Bundling – Kentucky could tackle a huge backlog of much-needed bridge and overpass repairs across the state by “bundling” them as a P3 contract for scores of improvements, Bevin said. The approach is similar to work currently underway in Pennsylvania, a P3 project being managed by Walsh Construction, the company that built the Abraham Lincoln Bridge and Lewis and Clark Bridge in Louisville/Southern Indiana.

Major Upgrade for Airports – Public-private partnerships could be the vehicle for major upgrades at one or more Kentucky airports, Bevin said. While he didn’t specify any locations, Kentucky has a number of regional airports whose expansion could be pivotal to luring major companies and economic investments.