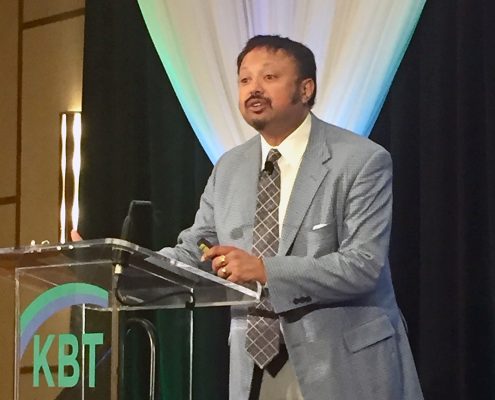 The national economy is strong and likely will remain strong for the next year-and-a-half or more. However, without increased tax rev
enue and additional investments from the private sector, governments in Kentucky and nationwide will struggle to keep up with the infrastructure investments needed to support economic growth, a national economist recently told members of Kentuckians for Better Transportation.

During KBT’s Annual Mid-Year Review in Louisville, Anirban Basu, chairman and CEO of Sage Policy Group Inc., noted that federal spending on infrastructure has slowed, leaving state and local leaders scrambling to find ways to fund roads, waterworks and other infrastructure improvements. Basu is the chief economist for Associated Builders and Contractors.

“There is a difference between authorization and appropriation,” he said. “The money is not flowing. We didn’t raise the gas tax. My goodness, did we not have an amazing opportunity to raise the gas tax? … The funding for the trust fund would have gone higher. But we didn’t do it, and we still haven’t gotten it done.”

The burden has fallen on states to fund infrastructure, particularly transportation projects. Spending on transportation has increased moderately in the last year – thanks to investments by states like Kentucky.

For example, Kentucky State Highway Engineer Andy Barber announced during the KBT event that the Commonwealth has committed to rehab or replace more than 1,000 bridges over the next six years though the Bridging Kentucky program. The program will cost the state an estimated $700 million and protect critical infrastructure.

“So, it is the states right now that are doing the heavy lifting,” Basu said, adding that states have too many other financial issues like Medicaid and pension costs. “That’s a real headwind to fund infrastructure.”

“We need more money, but we need them to raise the gas tax. We need funds to flow. States can not do all this heavy lifting for themselves.”

Another answer to sustained growth, Basu suggested, is turning to public-private partnerships, assuming governments have the resources to negotiate good deals with investors and developers.

Is the Largest West Coast Development a P3?