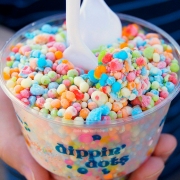 Many of us may remember growing up with the stick-to-your-tongue, frozen ice cream that emerged in the late 1980s. Dippin’ Dots introduced beaded ice cream and a new excitement to the world.

Now, the company’s patented cryogenic technology has moved beyond just ice cream and is now instrumental in the production of ingredients used in plant-based meat alternatives and other new industries.

The Dippin’ Dots headquarters in Paducah recently announced a $3.3 million expansion, expected to create up to 28 full-time jobs. The new 6,000 square foot warehouse facility will allow for years of sweet success.