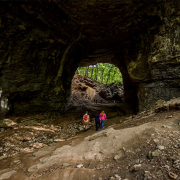 The funds are part of the “Restoring the Finest” initiative — an effort to make repairs and safety improvements to the Kentucky State Park system.

Carter Caves is scheduled to receive water and sewer upgrades, a new roof for the lodge and campground improvements. Greenbo Lake is set to have a roof replaced over its lodge rooms and get a new fire alarm and sprinkler system.

With Thursday’s announcement, Carter Caves will have received an estimated $4.5 million and Greenbo Lake an estimated $2.1 million since 2016 as a result of additional state park funding during the Bevin administration.

“These projects are critical to our state parks to keep our guests and employees safe,” Tourism, Arts and Heritage Secretary Donald Parkinson said during an announcement at Carter Caves. “We appreciate the support our parks receive from Gov. Bevin and members of the General Assembly.”

Kentucky State Parks received $18 million and $20 million in added funding as part of the “Refreshing the Finest” program in 2016-18. Bevin and lawmakers approved a $50 million bond issue for the “Restoring the Finest” campaign in state parks during the 2019 General Assembly.

“We were facing $240 million in deferred maintenance at the beginning of this administration,” Parks Commissioner Donnie Holland said. “Thanks to this funding, we are making much-needed repairs and improvements to help keep our parks open and contributing to the tourism economy across the state.”

Carter Caves State Resort Park has a lodge, restaurant, cottages and campground. The park offers cave tours year-round along with other recreational activities such as hiking, swimming, boating and fishing.

Read more on The Lane Report.