It’s been about two years since AppHarvest, the company aiming to make Eastern Kentucky the “high-tech agriculture capital of the country,” planned to begin construction of a two-million square foot greenhouse in Pikeville.

After numerous delays and the company’s decision to move its greenhouse to Morehead in January, AppHarvest announced this week that it has secured enough funding to begin construction.

An $82 million cash investment from Equilibrium Capital has put the company on a path to finally getting its greenhouse off the ground. Construction should begin this summer, officials said, and AppHarvest hopes to be fully operational in the latter-half of 2020.

Earth-moving equipment from Mount Sterling-based Walker Construction has already arrived at the site, where workers plan to level ground for the 60-acre, 2.7 million-square-foot greenhouse.

AppHarvest hopes to create 285 full-time jobs and grow tomatoes and cucumbers under the massive glass and steel greenhouse. 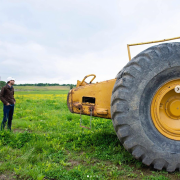